Happy Saturday Loves! It’s the fourth day of the new year and some great time off spent with family, friends and loved ones has given me time to reflect and check-in with myself on what I want and how I want to feel this year. Over the last six or so months I have found myself envious of those who are brave enough to take a break from social media and discover themselves without so much time on their screens and without the constant messaging we receive from social on how we should look, feel and be. This year, for the first time in about three years, I am in a job that does not require me to use social media daily and so I am going to take this opportunity to take a break from all social media and blogging. I have loved this blog, the community I have built through it and the space it has given me to express myself. When I started the blog it was just what I needed in a period of great change in my life. I don’t know if I will continue writing after my break but I am excited to see what a period away brings to me. Wishing you all the best of love and success in this new season. Xoxo #melaninadventures #newyear #socialmediabreak #bloggingbreak
It’s almost 2020! I hope the holiday season has treated you well with quality time with those you love. Let’s celebrate, relax and recharge our way into the early days of 2020 together. ✨#melaninadventures #2020 #newyear #holidayseason
It’s the most wonderful time of the year. I hope your holiday season is full of magic and love. Remember no matter how you celebrate this time of year, perfection isn’t possible but there can be perfect moments (moments that fill you with gratitude) in every day. 🎄❤️😘 #melaninadventures #holidayseason #gratitude #christmas
Under a week to go until Halloween! Have any fun or scary plans in store? I haven’t decided what I’m doing quite yet but have loved seeing all the mini pumpkins around town. 🎃 👻 #melaninadventures #halloween #fall #pumpkins #pumpkinseason #pumpkinpatch #pumpkinpicking #yyj
Social media can be a negative, anxiety inducing place but YOU can counter that by curating your feed to bring you both joy and support. I regularly spend time making sure I follow positive and encouraging content creators whose posts enrich my day and sometimes, like this morning, I scroll past the exact words I need to see such as this powerful quote. ❤️#melaninadventures #curateyourfeed #positivity #gratitude #love #wordstoliveby #wordsofwisdom #spreadlove
#BC friends the polls close in just under an hour but that’s still enough time for you to get out there and make your voice heard. Voting is quick and easier than you think, don’t miss your chance to have a say in our democracy. #itsourvote #bcvotes #elxn43 #canadavotes @electionscan_e

Dubbed the Trip of No Regrets or #SingleGirlsTraveltoBanff my May Long Weekend in Alberta was a chance for me to rediscover my love for travel and exploration with my good friend Elizabeth.

A trip that begins with a beautiful orange sunrise, spontaneous laughter at baggage claim and the consumption of a sour cream glazed donut that may or may not have had a taken a bite taken out of it before purchase cannot be anything but fun!

After landing in Calgary in the early morning hours we grabbed our bags and headed directly to Mountain Equipment Co-op, my favourite outdoors store. We had to stock up on a few last minute outdoor essentials, like a packable puff coat and long underwear.

Once properly stocked up we hit the Trans Canada Highway to Canmore, Alberta. The views along the ride were spectacular, there was an almost unobstructed view of the Canadian Rocky Mountains and we wished we had invested in a dash cam or Go Pro to document the ride.

Arriving in Canmore tired and more than a little hungry after a surprisingly fast car ride (only an hour and a half drive from downtown Calgary) we set about grabbing a quick bite to eat at a local restaurant. I had some of the best Alberta beef I have ever tasted that day and would quickly go back to Alberta just to eat more beef.

After our late lunch it was time to head off to explore this beautiful former mining town that had been so highly recommended. We walked the Policeman’s Creek trail, taking photos of the Three Sisters Mountains and the beautiful glacial waters and then headed back to the hostel to get ready for the next day hiking in Banff National Park. 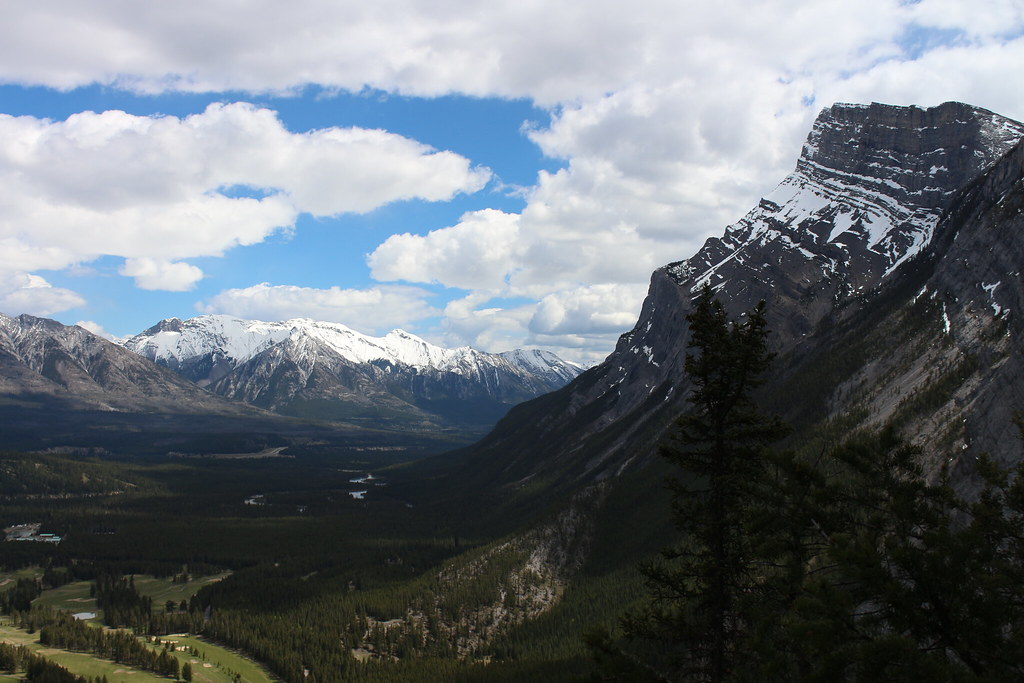 Banff National Park is only a 15 minute drive from the town of Canmore, but it is like entering another world, one built for tourists.

The drive into the town of Banff is much like driving a tunnel of strip malls but instead of shops you are surrounded mostly by wall to wall accommodation. Once you clear this , however, you will find yourself in one of the most beautiful places on earth. Everywhere you turn there is a new mountain range to admire. Throughout our hikes we found ourselves exclaiming “Oh my God!”, “Turn Around!” and “Wait until you see this view”. No picture could really do the Canadian Rockies justice, but we took shot after shot on our cellphones and DSLR’s in an effort to capture all the beauty that surrounded us. 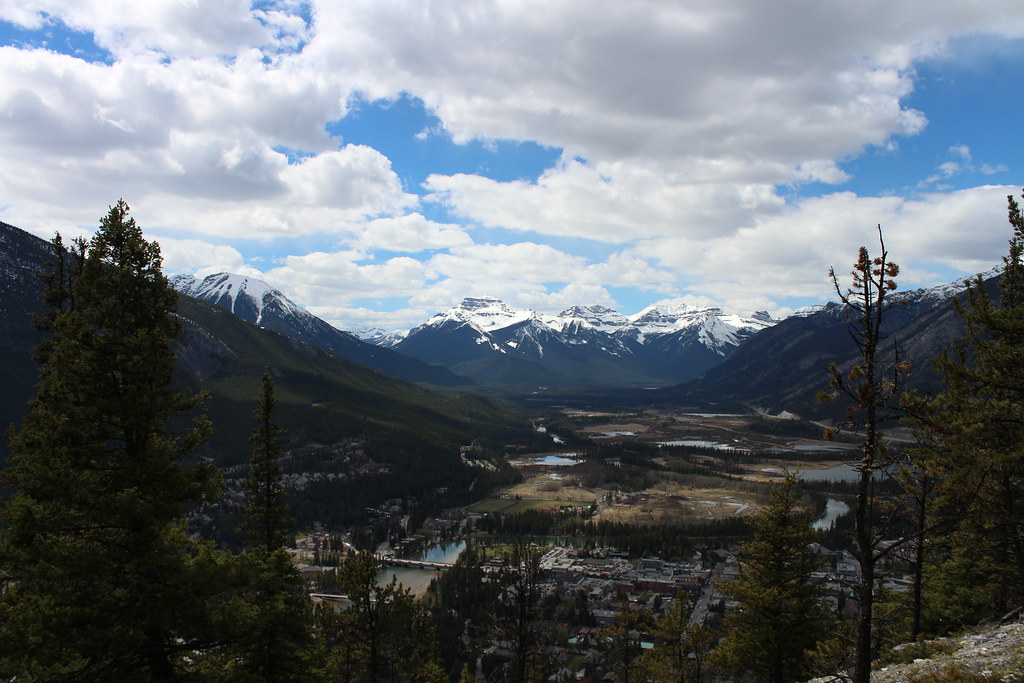 Our first day hiking did not turn out exactly as planned but we embraced the madness with enthusiasm. We started out determined to do the moderate Hoodoos trail to Surprise Corner (4.8 km one way) and then if we had the time and energy we would tackle the also moderate Tunnel Mountain Trail (2.4 km one way) before deciding what was next.

The Hoodoos Trail wasn’t marked as well as we hoped. A possible result of someone or something knocking the trail signs down half way through the route, we ended up doing the Hoodoos hike and cutting into another route before ending up at Surprise Corner.

At the end of the trail we were greeted with wonderful views of the town of Banff and came to the realization that our car was parked on the other side of the mountain and the only way to reach it was to walk a few kilometres uphill, following the main road.

During our walk to find the car we stumbled upon the second hike on our list, Tunnel Mountain Trail. The hike is about 2 km return and the summit has an amazing viewpoint where you can see the town of Banff, Bow Valley and Mount Rundle from Parks Canada red adirondack chairs that have been placed all over the national parks in honour of Canada 150. 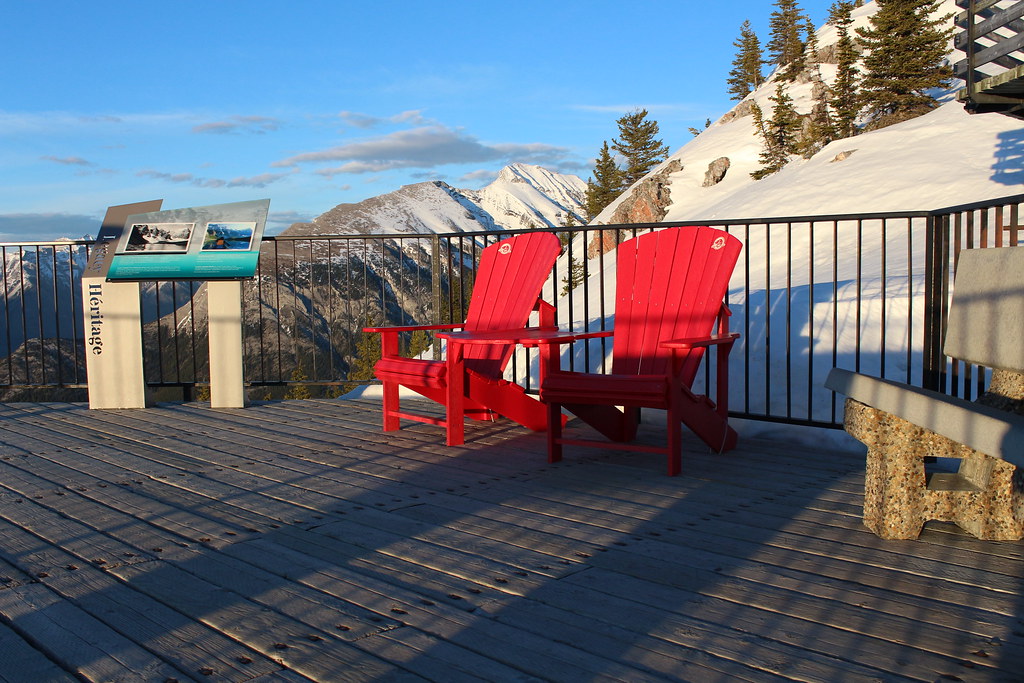 In the evening we rode the Banff gondola up to the top of Sulphur Mountain. The Sulphur Mountain Trail hike, a top priority on our list, was still closed for the season but at 5.5 kms one way, it probably would have been too much for us after a full day of hiking. The views up to the summit were spectacular, with The Fairmont Banff Springs hotel, the town, as well as our hiking routes all below us.

The weather in Banff over the May long weekend was hot, hot, hot but as you traveled up the mountain there was lots of ice and snow, a wonderful contrast to the parched trails we walked earlier in the day. Again lots of photos were taken and we discovered another set of red chairs with a breathtaking view.

With the trip coming to a close it was time to head to the famous Lake Louise. Elizabeth wanted to see the glacial waters and I was excited to check out the Fairmont hotel, neither proved to be a disappointment.

The old Canadian Pacific Railway hotel boasted a lovely cafe, great views of the lake and wonderful archways and balconies. When we arrived in the early morning it was quite cold and long underwear was needed, however,b y 9 am temperatures had risen to 24 C!

By arriving so early we had beat the tour buses and families, giving us an opportunity to grab great shots of the lake and take our time walking the easy Lake Louise Lakeshore trail (2 km one way). The end of the trail provided a view of a frozen waterfall and allowed for shots of the frozen lake with the mountains in the background.

Much of Lake Louise was still frozen at this time of year, so some of my top picks for hiking were unsafe due to the risk of avalanches as the weather warms and the snow melts. Even though I did not get to hike the Upper Lake Louise area, especially Plain of Six Glaciers trail, I was glad to have visited Lake Louise and the closures only made me want to come back again one day later in the season.

After visiting the Lake it was off to drive Highway 1A through Bow Valley Parkway to catch some wildlife and find a hike that might be a bit quieter during the busy long weekend.

A very helpful Parks Canada staffer had told me about the Castle Junction Area and  the moderate Castle Lookout trail (3.7 km one way), which was supposed to be much quieter than our first choice the easy Johnson Canyon Upper and Lower Falls (3.6 km combined).  At 7 km return this was the longest hike I had done yet and proved just how far I had come in my fitness journey. I lost 75 lbs over the last year and a half and Elizabeth could tell. I had no problem conquering the uphill trek to the summit, a task that a year and a half ago would have proved very challenging. 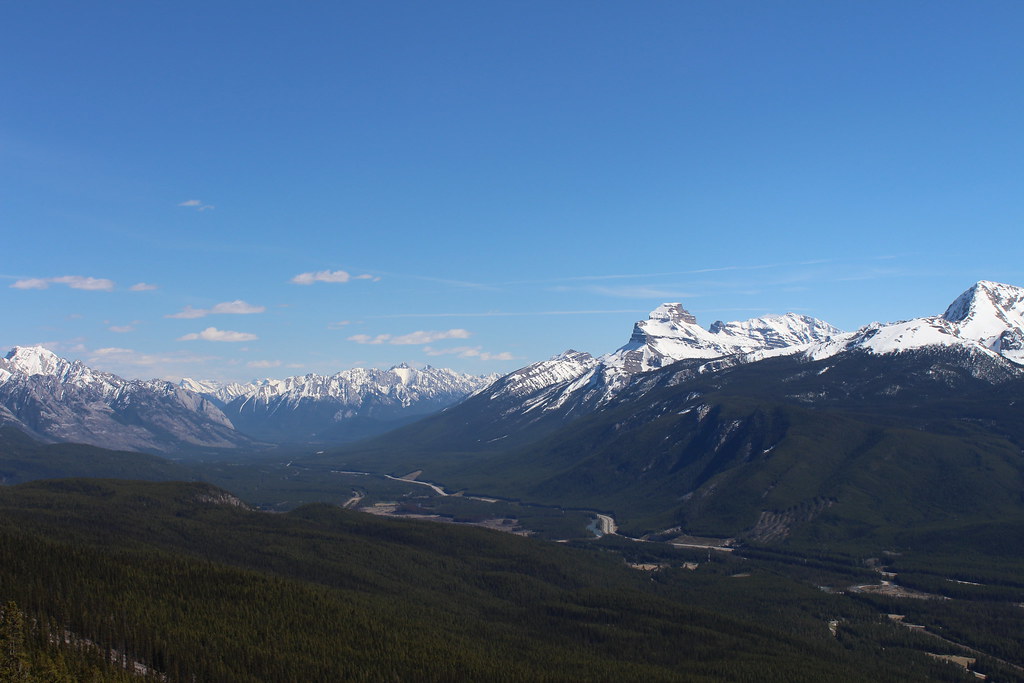 The views along this trail were beyond amazing and we found ourselves stopping regularly at the natural viewpoints created by breaks in the trees to whip out our DSLR’s and snap a few photos. The summit was once the sight of fire tower, erected to spot flames from afar, and although there is no tower today the space where the tower once stood creates a chance for expansive views of the middle of Bow Valley.

After Castle Mountain it was time to head back to Banff, in hopes of checking out the famous hot springs. Following the 1A again we spotted more wildlife than we could have ever imagined. A baby black bear that stood eating it’s lunch while our car was mere meters, a Momma Grizzly bear and her two cubs running and playing in the fields, big Horned sheep hanging out at the top of a cliff that backed onto the highway, as well as red squirrels, elk and gophers. The wildlife just wouldn’t quit in this area that had been closed off to foot traffic as the bears woke up from hibernation. 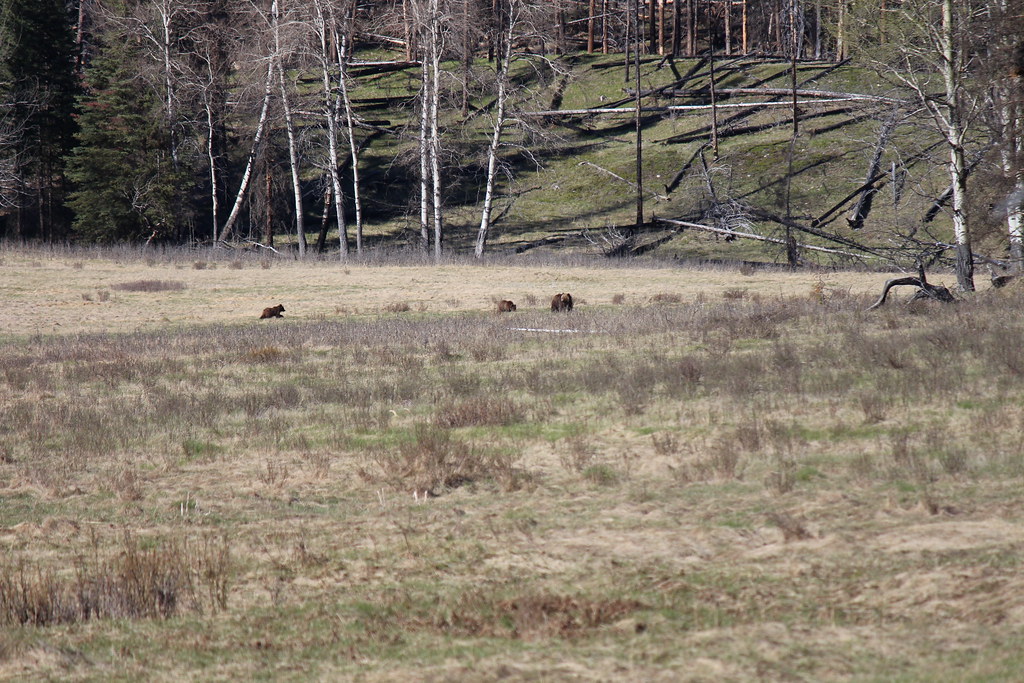 Once back in Banff our experience at the hot springs helped us to embody the spirit of the trip, no regrets. The small pool held 205 people and reminded me much of a human soup. Not as clean as I would have liked, this bath did ease my aching muscles slightly and gave me the ability to say I have tired the world famous Banff hot springs.

The Trip of No Regrets was a success. The biggest thing I took out of this trip was how blessed I am to have wonderful friends and the ability to travel on a whim. I left Banff wanting to do more exploring and a lot more hiking, and possibly even another climb to the edge of a waterfall for a picture like the above.

I can’t wait to go back to Alberta and travel to Jasper to hike, drive the Icefields Parkway and walk out on the glass bottomed Glacier Skywalk discovering more of what the wonderful province has to offer me.

3 thoughts on “The Trip of No Regrets”